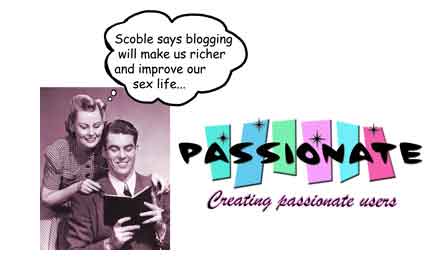 I am NOT a skiHer or a skateboardHer or a runHer. I work on ecological causes, but I am NOT an enviHERmental activist.And I am NOT typing this on my computeHer (even if it is, I must say, a sexy-yet-adorable black MacBook). These are my passions, but they reflect the part of me that is about horses, running, skiing, skating, the environment, writing, or creating. If I relabel them to reflect my gender, I believe both (my gender and the labeled thing) are diminished by the "Her" qualifier. This is just my opinion, and I'm not an expert on women's issues or gender studies or sociology.
But I know quite a lot about being a woman in technology.

And while I cannot speak for all (or even most) women in tech, I am tired of others speaking for ME. And in the recent coverage of the BlogHer conference, I've seen some disturbing sweeping statements that lump all bloggers-who-happen-to-be-women together as the "Women Bloggers", with detailed descriptions of what's it like to be one of "us".
(Ironically, many of those descriptions--even among those who were there--are wildly different and contradictory, sometimes bitterly so.)

[Key disclaimer: it's only a small subset of women from the conference--and reporters writing about it--who've been making the claims. Most of the women who attended--including the smart, savvy, founders--understand, appreciate, and welcome the diversity of the women who make up the BlogHer community. I know and admire many of them.]

I'm tired of being told things about myself that sound as foreign to me as they might to a space alien. I am tired of others describing what it's like to BE me. I'm tired of being told what others think of me. And I'm especially tired of being told how naive I am, and of having my accomplishments diminished by women who insist that to have visibility as a "Woman Blogger" I must have done something, um, special. And by "special", I mean... sucking up, kissing up, or otherwise catering to the "male establishment that's oh so determined to keep me "invisible."

All of you reading this are a proof that--for me--this is absurd. If you're here, I'm most definitely not invisible.

And as for blaming men for our problems, oh if ONLY I had the luxury of believing that when I've failed at work, it was because of my breasts. But when your default assumption is that you probably have nobody to blame but yourself, you're forced to look very hard at yourself. Does this mean I refuse to ever consider the possibility that I was a victim of gender discrimination or at least unconscious gender bias? No. It's always possible, although less often and less signifcantly than in many other domains. (Ask my female firefighter friend... yikes)

I heard several people--male and female--wonder if the small percentage of men at BlogHer would now understand what it's like to be a woman at a technology conference, but I believe this is not a fair comparison. O'Reilly's eTech is not HeTech. Those men aren't there as codeHims. They aren't celebrating their manhood. They are there as programmers. Humans who write code.

I want to be treated, as Maura says in this post "like a person. Not a woman or a man or a space alien."

The tagline I've used on and off over the past 15 years to indicate how lucky I feel about being in a profession (and in a country) where gender is not nearly as important today as it once was (and yes, I'm extremely grateful for all those who fought to make this happen):

"The compiler doesn't care if the person who forgot the curly brace is wearing a black lace bra."

Yes, I realize that the compiler is not the whole story... and that while the compiler is gender-blind, the context in which you're asked to write that code is loaded with interpersonal issues. Still...
I love being a woman. I love wearing a lace bra. And I love writing code. Personally, I'm delighted at how well these can work together. And my big wish is that more women--especially younger women--will discover the same thing.

I'd also like to suggest two other posts by people who are as confused as I am by this: